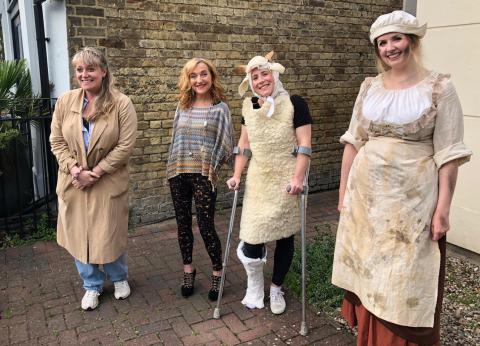 Lily Bevan (left) with some of the cast from the show.

Cast and crew were treated with a visit from the author of Zoo and Seven Monologues on the Friday evening performance at Hampton Hill Theatre. They weren’t told in advance that Lily Bevan would be in the audience so as not to distract them but, speaking after the show, Lily said that she loved both pieces.

She particularly enjoyed seeing Zoo (directed by Josh Clarke) for the first time because when it was performed at the Edinburgh Fringe, The Vaults Festival and Theatre 503 in Battersea, Lily played Bonnie, the Zookeeper.  She also enjoyed the way that directors Linda Hansell and Kelly Wood had interpreted the monologues which was very different from anything she’d seen before.

TTC is the first non-professional company in the UK to perform these two pieces and the club was thrilled that Lily Bevan was able to attend and help Hampton Hill Theatre celebrate its first post lockdown production.