Teddington Theatre Club (TTC) has hosted a series of webinar sessions to help prepare drama and theatre A-Level students studying the play, Our Country's Good, who will be sitting their exams in a matter of weeks.

The play, written by Timberlake Wertenbaker, is currently in rehearsal at Hampton Hill Theatre and will be live on stage from the 28th June until 2nd July.

It tells the story of a group of convicts and a young officer who rehearse and perform a play – Australia's first theatrical production. With opposition from the officers and a leading lady who may be hanged, the odds are stacked against them.

Fiona Auty, the set designer for TTC's production, ran the first webinar which focused on the design process and the choices made around costumes, lighting and sound. 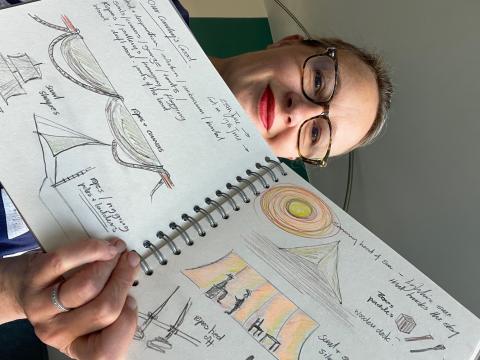 Fiona showing the students some of her initial sketches.

Director Matt Beresford said: "It was great sharing our thoughts and passion for this wonderful play with lots of young students from several different colleges. We very much hope they will come and see the play when it launches, a chance for us to bring the literature to life!"

In response to the positive feedback the theatre received from teachers and students alike, a second webinar was hosted last Thursday with focus turned towards the rehearsal process and how a director works to bring the best out of his cast.

Mr Beresford, who has been a director at TTC since 2017, hosted the second webinar and provided a vital insight into the various roles a director is responsible for. From working with designers to create a unified aesthetic that turns literature into something that speaks to the audience, to working with stage management on practical elements such as budgeting and stage organisation and rehearsal practice.

The webinar also included guidance on how to approach exam questions and provided a chance for two of the main actors from the Our Country's Good cast, Nigel Cole and Jerome Kennedy, to shed light on how they approached their characters.

Actor Nigel Cole who plays Harry, Campbell and Arscott in TTC's production, takes attendees through his approach to a scene within the play.

Attendees joined from across the country including students and teachers from London, Bristol and Portsmouth.

On the 28th June a pre-show discussion will be held where Mr Beresford and members of the production team will be available to answer questions from students ahead of the opening night. If you wish to join us contact marketing@teddingtontheatreclub.org.uk

Tickets are now available to purchase at the TTC's box office.