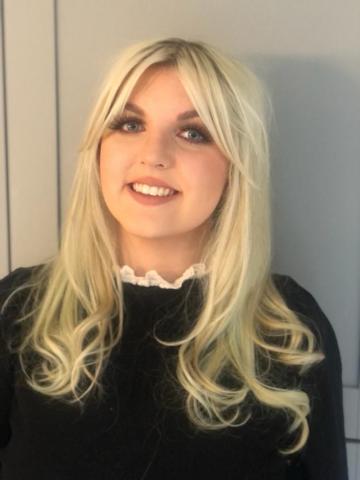 The winner of TTC’s Student Review Competition is Scarlett Morine who has just finished her A levels at King Edward VI Grammar School in Chelmsford. Scarlett beat off stiff competition, but the judges were unanimous in their decision.

A- Level students of Drama or English Literature were asked to review TTC’s streamed production, Escaped Alone by Caryl Churchill. The judges were very impressed by Scarlett’s lively style and depth of analysis into both the characters and themes of the play. Her range of vocabulary was exceptional, and Scarlett showed good observation of the technical issues involved in filming the play.

Helen Wiltshire, Head of Sixth Form at Kings Edward VI Grammar School said, “I am really delighted for Scarlett that her review has won first prize in the Student Review Competition. I think it’s a great idea for a community theatre group like Teddington Theatre Club to provide these kinds of opportunities for students and with the added bonus of attracting young people to watch live (and recorded) performances.”

Scarlett, 18, is currently taking Art A-Level during a gap year and plans to study English Literature at university. She was delighted to receive the news that she had won and said, “I’m a first-time theatre reviewer, so I’m just thankful that I did the performance justice! I absolutely loved the production, and writing a review was a good opportunity for me to explore literature in a different way. I’m so excited to have the chance to visit Hampton Hill Theatre to see another TTC production, and, if it’s okay, I would love to write them another review!”

Her prize is two tickets to see a TTC production of her choice and we look forward to welcoming Scarlett at Hampton Hill Theatre at some point in the future.

Juliet Hill from Surbiton High School was highly commended for her submission.

Teddington Theatre Club’s production of Caryl Churchill’s ‘Escaped Alone’ is founded on the tensions between domesticity and doomsday, chatter and catastrophe.

Directed by Daniel Wain, this exquisitely acted play takes place in an enclosed garden setting where four 70-something women chat about both the trivial and significant: their connection established through easy harmony and unsaid, yet somehow understood, words. Crossing the liminal boundary of the garden gate, Mrs Jarrett (Sally Halsey) guides our introduction into the cosy scene; henceforth, she dictates audience focus, addressing us directly with a nightmarish account of corporate infanticide and mass starvation remedied by screen-time – a future reality, realities, or unreality? – building up until the illusion of peace is shattered.

This exhilarating and haunting play, endowed with an almost-Orwellian warning of the socio-ecological state of the world, begs the audience to see through the façade of everyday life, symbolised by the relaxed chatter of the group, to the crisis of climate change and capitalist culture, resonating through Mrs Jarrett’s disturbing narrative. The simple premise of conversation between ‘women of a certain age’ – on matters other than menopause! – is charmingly feminist. The slow-reveal of each woman’s darkest truth, including a powerful take on agoraphobia by Lena (Jenny Hobson), ironically resonating due to the current pandemic, is a refreshing insight into a historically underestimated group.

Daniel Wain’s arresting production perfectly encapsulates the growing undercurrent of ambiguity and tension in this Caryl Churchill play. At first glance, Mrs Jarrett’s outsidership is staged as comfortably distant, her monologues delivered from a lone armchair in a hyper-feminised living room where a lamp casts an inviting glow, starkly contradicting the monologue’s terror and obscenity. The domestic sphere slowly unravels into an unnerving black curtained backdrop, later revealed as a stage on which the ‘living room’ can be seen, somewhat voyeuristically, breaking the fourth-wall. Streaming the play as a film, rather than live theatre, is genuinely impactful. The effective movement scene-to-scene, particularly the cut-transition in the form of an eye (suitably Big Brother-esque), and the interiority of each woman’s thought, is cleverly depicted through professional filming techniques. During her monologue, Lena’s self-isolation is beautifully echoed in a fade to black and white, distinguishing her from the ‘colour’ of the group, akin to being an old television when the world now operates in colour. Sally’s (Michelle Hood) obsessive-compulsive fear of cats, and where they may be, is ingeniously captured by the sudden, somewhat comical, changes in camera angle, casting us, the audience, as the ‘cat’ that’s under the chair, on top of the cupboard… in the fridge. Vi’s (Jane Marcus) monologue is aptly filmed in isolated profile, repeatedly panning out to the other characters, acting as quasi-jury, perhaps?

The Teddington Theatre Club’s bewitching take on Caryl Churchill’s ‘Escaped Alone’ had me smiling repeatedly, yet feeling Mrs Jarrett’s dystopian reality might just be a shade too close to our own.

If you like your Apocalypse served with PG Tips, this one is for you!