New to the area, I had never encountered either the Teddington Theatre Club or the Hampton Hill Theatre but, invited to a run through of their latest production Shakespeare in Love, I am now a real fan.

While the set was being built on stage – well, to quote the Bard, they have their exits and their entrances – swords were clashing in rehearsal. Deft but not deadly, as director Ben Clare reminded the cast, they should not make actual contact when wielding their weapons.

An imagined version of how William Shakespeare’s Romeo and Juliet came to be written, we meet young Will afflicted by writer’s block. What he needs is a muse. Enter Viola De Lesseps, who inspires him to write one of the greatest romances of all time. 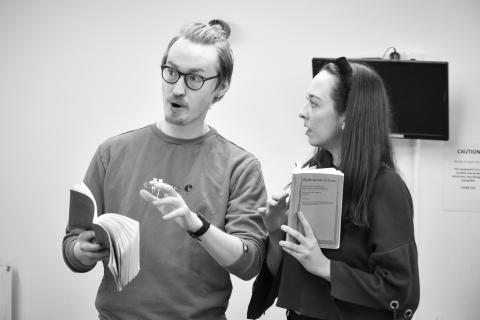 But he is married to Anne Hathaway and she is betrothed to the ruthless and cash-strapped Lord Wessex, played by a truly villainous Paul Furlong, so where will their romance end?

Viola, as much in love with the theatre and Will’s writing as with Shakespeare himself, initially impersonates a man to play his Romeo.  Will at one stage steps out as Viola’s female cousin. So, it’s easy to see the fun of this West End hit from Billy Elliot writer Lee Hall, adapting the multi-Oscar-winning film by Tom Stoppard and Marc Norman.

Playing out around one of the greatest stories about theatre and love, this production of Shakespeare in Love is presented by arrangement with Concord Theatricals Ltd. 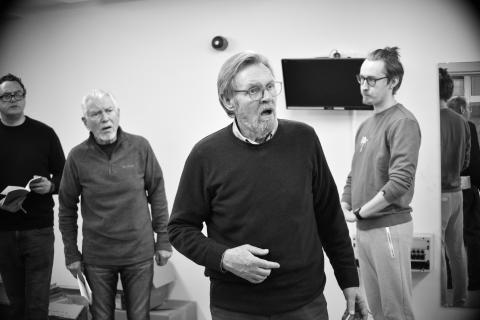 At the rehearsal, the cast were not in costume but were certainly in character and a more professional group would be hard to find. Anastasia Drew playing Viola, who in turn plays Juliette, is quite outstanding and Joe Evans in the role of our young playwright is a totally believable Shakespeare.

There are moments of emotion but plenty of laughs, and when did we ever need them more?

Philip Henslowe, owner of the Rose theatre is deeply in debt to Fennyman, who’s never averse to coming round with his henchmen and telling Henslowe his boots are about to catch fire!

Henslowe needs Will to write the script to clear his debts, but what he really wants is a comedy, well of course he does, he loves comedy – providing much of it himself in a humorous rendition by Steve Taylor. His character is constantly warring with competitor actor-manager Richard Burbage at his most flamboyant as played by Daniel Wain.

The actors chosen to play characters in Shakespeare’s script are a motley bunch gathered in the absence of a professional cast and all the more amusing for it, especially during the auditions when they drive young Will to despair with overacting, underachievement and speech defects. 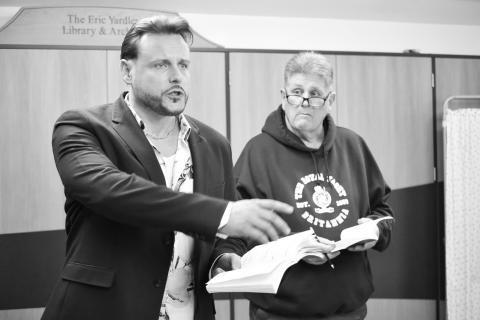 Will, meanwhile, owes much to fellow playwright Christopher Marlowe, ably played by Trine Taraldsvik, who aids and abets not only the writing of his play but his seduction of Viola.  And then we have Viola’s long-suffering nurse, not just in the play but in real life as, played by Enid Gayle, she arrives at rehearsals with a broken arm in a sling.

Sue Bell as Elizabeth the Queen is so regal it’s hard not to drop a curtsy. A woman who knows what it is to take charge in a man’s world, she nonetheless can’t save Viola from the dreadful Wessex but, on the other hand, as she is delighted to confess “We do like a dog!”

Sadly, the dog was missing for this rehearsal (and there was talk of treats having to be used to make him perform, which bodes well for the comic relief) but everything else that makes an entertaining play was there in abundance.