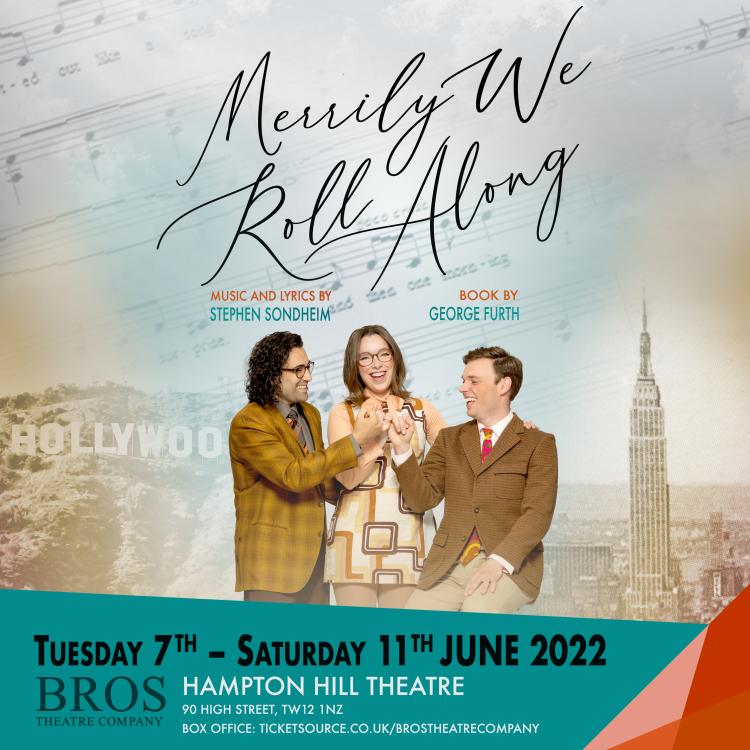 Merrily We Roll along

Multi award-winning BROS Theatre Company are proud to bring Sondheim’s iconic ‘Merrily We Roll Along’ to Hampton Hill Theatre for 6 performances only!

Performances at 7.45pm and Saturday Matinee at 2.30pm

Director Paul Turnbull is back again with BROS TC.  Their reputation for offering audiences consistently high-quality productions year in year out precedes them, and he is determined that this will be no exception.

Paul has brought numerous shows to Hampton Hill Theatre and won several awards: winner of the NODA London District 3 award for Best Musical with Sondheim’s ‘A Little Night Music’ in 2017, Swan Award winner for Best Musical with ‘Musical of Musicals the Musical” in 2015 and nominated Best Musical for another Sondheim masterpiece ‘Sweeney Todd’ in 2020.  He also directed the sell-out production of ‘Under Milk Wood’ for TTC in 2017.

‘Merrily We Roll Along’ is a musical with a book by George Firth and lyrics and music by Stephen Sondheim. It is based on the 1934 play of the same name by George S. Kaufman and Moss Hart.

It tells the story of what happens when friendship is tainted by ambition. In reverse. The show starts at the end of the story, in the late 1970’s when we’re introduced to the three central characters, each damaged in their own way and with the bond between them apparently irreparable. We then travel backwards through time, watching the moments of their lives that led them from young 60’s idealists who shared the same dreams, to bitter artists wondering what might have been.

The end of the show marks the beginning of their story where everything seems possible, even though we already know how things finish.

Friendship, compromise, and the high price of success, this is a poignant and emotional contemporary story about the importance of staying true to one's ideals. With a brilliant "Broadway-style" score and that deep insight one expects from any Sondheim endeavour, Merrily We Roll Along is a spirited and moving cautionary tale for anyone who has ever pursued a dream.

This amateur production is presented by arrangement with Music Theatre International (Europe)
All authorised performance materials are also supplied by MTI Europe www.mtishows.co.uk